Land Rover – The weird and wonderful

Right from the beginning, Land Rovers have been loved for their simplicity, ruggedness and adaptability. Machines that can truly be put to use in almost any setting, however for some this still isn’t enough.
Certain organisations and individuals have wanted to make their Land Rovers even more suited to the task in hand. This desire has led to the creation of many weird and wonderful Land Rovers, some created by Land Rover themselves, others by engineers willing to take on a challenge. 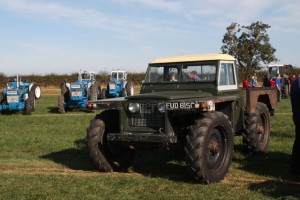 The forestry commission was experiencing problems with their standard Land Rovers, they kept getting them stuck in the deep ruts on the forest tracks, the Machinery Research Officer at the time thought up a solution.
With his idea roughly sketched on paper he sat down with Land Rover, he wanted to use the tractor type wheels and tyres that the Forestry Commission was already using on other machinery.
Land Rover agreed to take on the project and employed the help of the company “Roadless” to re engineer 109” to make it strong enough for the upgrades while still keeping it functional for the job it was going to be used for.
The result was the Roadless Forest Rover.
Only around 20 examples were produced.

© Copyright Freedom 4X4  2015. All trademarks and registered trademarks are the property of their respective owners.